Libron, 28, was all smiles as 5th District Board Member Alain Gatuslao in behalf of Governor Alfredo Marañon Jr, made the announcement on the said cash assistance during the 4th Convergence of “Marching for Peace, Serving the Countryside” activity.

In an interview, Chairman Libron stressed that they are lucky because of all the barangays in Himamaylan City, Brgy. Carabalan was chosen to be the only recipient of the said assistance.

Aside from the cash assistance, the barangay also received one set of Public Address System (PAS) from the provincial government.

The Barangay Councilors and Barangay Peace Action Team (BPAT) of Carabalan were all present in uniform. They said it is one way to show their support to their Barangay Chairman in welcoming the full force of the Provincial Peace Integration and Development Unit (Pro-PIDU) and various stakeholders

For his part, Board Member Gatuslao rallied to everyone to be cooperative because they can do more if they will unite.

Previously, Gov Maranon reiterated his call for Negrosanons to help fight poverty because it is the real enemy now and not our fellow Filipinos. He urged parents to send their children to school because education is one of the fastest ways to solve poverty.

The said peace drive spearheaded by the Provincial Peace Integration and Development Unit (Pro-PIDU) included a 100 km foot march and a civilian humanitarian effort; one stop-shop that caters the immediate needs of the locals. It aimed to stop violence, to provide protection to the people and help depressed communities. (3CMOBN) 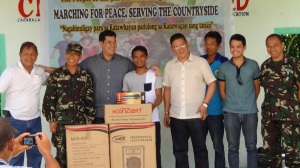 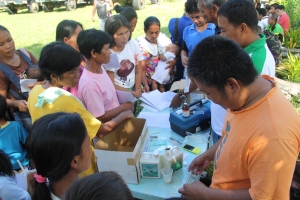 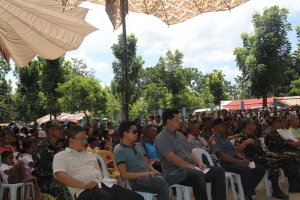