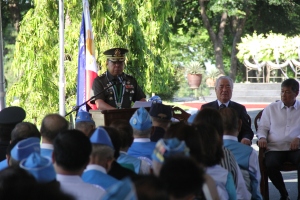 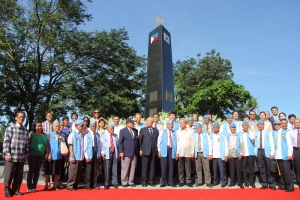 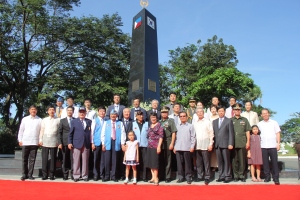 The Philippine Army gave its utmost respect and dedication to our Korean War Veterans who composed the Philippine Expeditionary Force to Korea (PEFTOK) who showed the world the sterling qualities of patriotism, courage and a steadfast dedication to duty that made the heroic Filipinos to their generation.

PEFTOK’s mission was to defend the Republic of Korea against communist conquest.

The first PEFTOK, the 10th Battalion Combat Team (BCT) reached South Korea in September 1950. They were deployed to South Korea in fulfillment of the Philippines pledge of assistance to the United Nation’s effort to stem North Korea’s Communist invasion of South Korea in 1950s.

Massively outnumbered, the 10th BCT with only 900 men withstood the night attack of an entire Chinese army of 40, 000 men during the Battle of Yuldong in North Korea on April 23, 1951.

Considering the strength of the Chinese, all UN forces retreated, except the Filipinos who engaged the Chinese in a bitter close quarter fighting. UN Command ordered the Filipino forces to disengage but was ignored and instead they engaged the enemy up to the last man.

The 20th BCT relieved the 10th BCT, which returns to the Philippines covered in glory as “The Fighting Tenth” on September 5, 1951. The 20th BCT again seized Hill Eerie, a strategic observation post that proves invaluable to PEFTOK in the coming battles against the CPV.

The 19th BCT replacing the 20th BCT emerged victorious after a fierce four-day battle to defend Hill 191 and Hill Eerie on 21 June 1952. This gory “Battle for Combat Outpost No. 8″ inflicts heavy losses on the Chinese. Triumphant Filipinos plant the National Flag on the summit of Hill 191 to proclaim their victory over the Chinese.

On 26 March 1953, the 14th BCT takes over the PEFTOK colors in Korea. It was then followed by the last PEFTOK contingent the 2nd BCT who arrived in Korea on 19 April 1954 and returned in the Philippines on June 1955.

Indeed, our PEFTOK soldiers fought on and inspired the whole UN effort to stem the Communist attack. This great Filipino victory helps deny the communists the decisive victory that would have ended the Korean War with their complete conquest of the Republic of Korea and the destruction of the United Nation Command (UNC). It would be an understatement to say that they prevented the UN front from collapsing.

The Philippines and its 20 other UN allies paid in blood and pain for defending democracy in South Korea. This First World War between democracy and communism took the lives of 112 Filipino fighting men, wounding 313 others while 16 men remain officially missing-in-action to this day.

During this year’s celebration of the Korean War Veterans Memorial Day, the Philippine Army as well as people of the Republic of Korea remembers the heroism of the PEFTOK soldiers and their invaluable service not just to the country, but to the attainment of world peace as well.