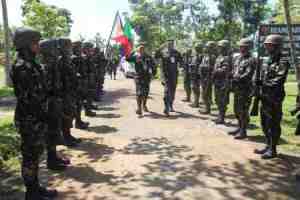 The visit primarily intends to familiarize the new commander on the current situation in the area of operations of 3ID, aside from having the opportunity to personally interact with the Spearhead troopers on the ground.

On Tuesday morning September 16, Guerrero came back to the battalion he once led in 2003 when it was operating in Negros Occidental, the 61st Infantry “Hunter” Battalion now based in Tapaz, Capiz. He was warmly welcomed by the men and women of the 61IB led by Lt Col Victor Llapitan.

From 61IB, Guerrero went to Miag-ao, Iloilo to personally meet the troops of 82nd Infantry “Bantay-Laya” Battalion under the command of Lt Col Aldwine Almase.

The highlight of the visit was the traditional “talk to men” where Guerrero expressed his confidence with the Spearhead troopers that through their dedication and commitment in implementing the AFP Internal Peace and Security Plan “Bayanihan”, the 3ID will ultimately “win the peace” in the region.

He also exhorted the troops to continue to maintain the highest standards of discipline and competence as they perform their mandate to bring peace and development to the people.

“Let us continue to serve selflessly and perform our duty with the highest degree of professionalism. In the conduct of our operations, there should be no human rights violations,” Guererro said.

“Let us make our people proud of their Philippine Army as we pursue our vision to be “a world-class Army that is a source of national pride”,” Gurrero added.

MGen Guerrero is also expected to visit other units in the field in the coming days.