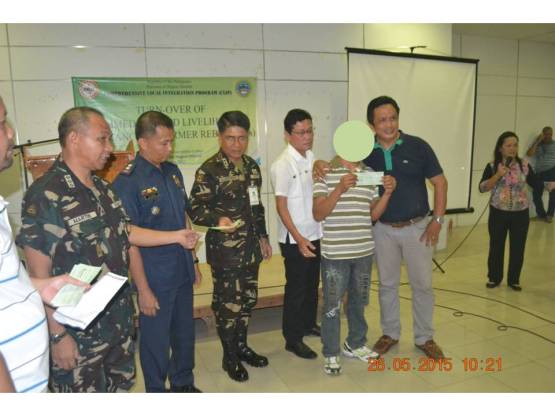 The CLIP beneficiaries, composed of twenty-nine (29) males and four (4) females, received the amount of Php 15, 000.00 for financial assistance and Php 50, 000.00 worth of livelihood assistance each to start a livelihood project which will be monitored regularly by the Department of Social Welfare and Development and other concerned agencies.

Aside from the financial and livelihood assistance, the beneficiaries and their families also underwent Socio-Economic Skills and Values Formation Orientation Training which was administered by the Provincial Interior and Local Government Office and Provincial Social Welfare and Development Office.

Meanwhile, Colonel Allan Martin, Commander of 302nd Brigade based in Tanjay City, Negros Oriental advised the former rebels to use the assistance that they got to have a better life.

The CLIP beneficiaries expressed their deepest gratitude especially to the Philippine Army for facilitating their return to the folds of the law and mainstream society and also to the provincial government for providing them such program which will help them to become productive citizens of Negros Oriental.

Major General Rey Leonardo Guerrero, Commander of the 3rd Infantry Division emphasized the relevance of this program to end violence and insurgency and promote peace and development in Negros Oriental.

MGen Guerrero further encouraged other members of New People’s Army to abandon the armed struggle and live a normal life.

CLIP is the national integration program that facilitates the mainstreaming of the FRs as productive citizens.

Those who can avail of the CLIP are regular members of the NPA who have expressed the desire to abandon armed violence; NPA who surfaced in 2011 and those who have not received full assistance under the Social Integration Program (SIP)