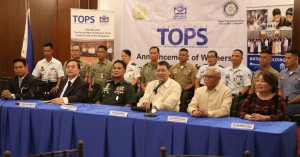 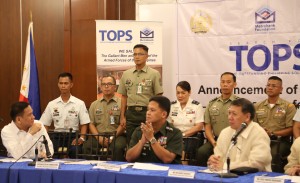 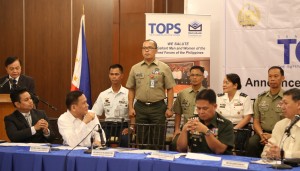 FORT BONIFACIO, Metro Manila – Three Army soldiers were among the Ten Outstanding Philippine Soldiers (TOPS) named by the Metrobank Foundation, Inc. during the announcement of winners of the 2015 Search for TOPS at the AFP Officers Club House in Camp Aguinaldo, Quezon City on Monday, June 22.

Col Pamonag was cited for his efforts in rescuing more than 162 hostages, capturing more than 160 Moro National Liberation Front (MNLF) fighters, and recovering high-powered firearms during the Zamboanga siege last September 2013. He was also the first Asian and Filipino recipient of the United States Special Operations Command (US SOCOM) Medal for his vision in raising the capacity of the AFP and for the development of combating terrorism capabilities. During his stint as Dohuk Sector Commander of the United Nations Guard Contingent in Iraq, he conducted dialogues with the locals which helped promote peace and order in the area. More so, he reaches out with the community by donating computers to the underprivileged students of the Our Lady of Sacred Heart Academy in his hometown in Guimba, Nueva Ecija.

MSgt Cariaga, on the other hand, was noted for his initiatives in enhancing the communication electronic information capabilities of the AFP, particularly in the field of intelligence. One of his notable innovations is the development and design of the electronic Geographical Estimate on the Situation Counter Insurgency tool that is functional in analysis and situation and formulations of courses of action for a commander in a mission. His expertise in intelligence has also contributed to a number of successful military operations. Apart from these accomplishments, he is also active in various community initiatives such as the project “Kalkal” in G2 Village, Makati City, and in helping barangays enhance its communication electronic and information equipment.

Meanwhile, MSgt Lascano played a critical role in ensuring the efficiency of the Military Intelligence Group as Chief Clerk of his unit. He adopted a system called “completed staff work” that allowed faster processing and tracking of documents at the Office of the Deputy Chief of Staff for Intelligence. He was also instrumental in enlightening Bicol residents of the government’s peace and development efforts through dialogues with the locals. He also engages in various community projects .

The Search for “The Outstanding Philippine Soldiers” is an annual event jointly undertaken by the Metrobank Foundation, Inc and the Rotary Club of Makati Metro (RCMM). This year’s Final Board of Judges was chaired by Senator Loren B Legarda, co-chaired by Secretary Corazon Juliano – Soliman of the Department of Social Welfare and Development, and vice-chaired by Congressman Mel Senen Sarmiento, Representative of the 1st District of Western Samar.