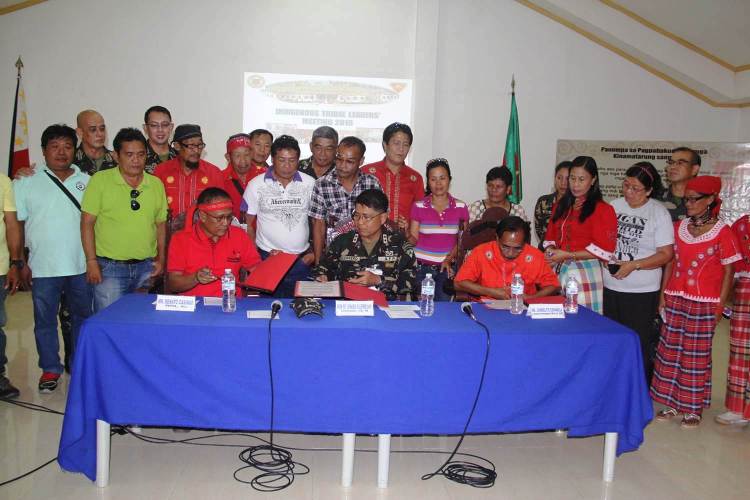 “For consistently upholding the rights of the Indigenous Peoples (IPs) as an advocacy to continuously empower them; for the untiring efforts that bring harmonious relationship among the IP communities and the government sector through the Philippine Army on the affected area, and such visibility of services increased the trust and confidence of the Indigenous Peoples to government forces; and for the love and dedication to improve the quality of life of the IPs through social basic services particularly on Geographically Isolated and Depressed Areas (GIDAs) deserves commendation as Honorary Adviser of the Indigenous Peoples by self ascription and determination,” reads the resolution number 2015-03 that was unanimously signed and approved by the members of the board of the PIPOL, Inc. on October 3, 2015.

The activity was attended by the Indigenous tribal leaders and members of their communities, members of the board of the PIPOL, Inc. headed by its President Mr. Renato Casinao, Mr. Jornelito Española, Community Development Officer III of NCIP, men and women of 3ID, and Lt. Col. Leonardo Peña, Commanding Officer of the 61st Infantry Battalion whose area of operations covers the towns of Jamindan and Tapaz in Capiz, and Calinog and Lambunao in Iloilo where most of the IP communities are located.

“The Army today is different. They open their camps for the Indigenous Peoples, they help the IPs through the programs that bring basic social services to our communities, and they have shown their love and concern for us in times of disaster and calamities. They are our true partners in alleviating our condition and in attaining lasting peace in our country,” said Renato Casinao.

Casinao also urged the other IP leaders to help inform the other tribal leaders/council of elders in Panay especially in the far flung IP communities that the Philippine Army is working hard to help improve their quality of life consistent with their customary laws and tradition.

The conferment is a fitting tribute not only to Maj. Gen. Guerrero but to the entire Philippine Army and the Armed Forces of the Philippines in general. It is how the Indigenous Peoples perceive the Army today, as guardian of peace and protector of the peoples’ rights.

For his part, Maj. Gen. Guerrero thanked the PIPOL, Inc. for the honor bestowed upon him as honorary adviser of the group. “It is incumbent upon us in the military to not only promote peace and security but also to look after the development of our communities.  I share this recognition with all the spearhead troopers especially those in the frontlines of our campaign,” Maj. Guerrero added.

It can be recalled that on October 29, 2015, the 3ID in collaboration with other stakeholders held the Indigenous Peoples’ Congress 2015 in Antique in order to recognize the important role of the IPs in promoting peace and development, to empower the IP leaders and increase their awareness of the Indigenous Peoples Rights Acts (IPRA) of 1997 or RA8371.

Also on October 21-22, 2013, the First Panay-Guimaras Indigenous Peoples Leadership Summit was held in 3ID’s headquarters in Cam Peralta, Jamindan Capiz that was attended by 194 IP leaders from the provinces of Iloilo, Capiz, Aklan, Antique and Guimaras.

The said summit which emphasized the education and empowerment of the IP leaders through the IPRA forged the initiative of the National Government towards lasting peace in our country which was spearheaded by the Army’s 3ID.

The activity culminated with the recitation and signing of the Pledge to Uphold IP Rights and to Strengthen the Rights of the IPs by the IP leaders, members of their communities and the personnel of 3ID.