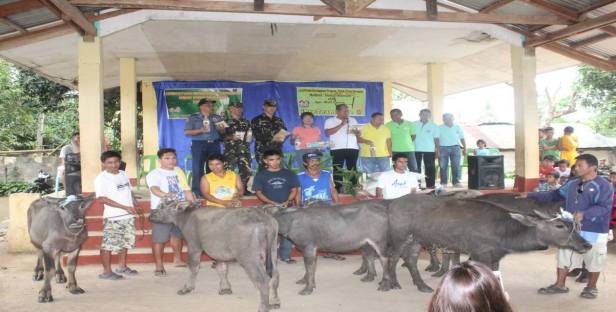 Hand in hand with the different government agencies in the Province of Bohol in delivering basic services to the people, members of Countryside Development Program-Purok Power Movement incollaboration with the 47th Infantry (Katapatan) Battalion CIVAC team and 302nd Dental and Surgical Team extended help to the people of Brgy Katipunan and Brgy Buenavista, both of Carmen, Bohol.

A medical and dental outreach program and AGRI-HEAT Caravan was successfully conducted to the two Barangays last February 13. Over 565 residents from Brgy Katipunan and Brgy Buenavista benefited from the free medical and dental services. Brgy Katipunan was fortunate to receive 7 Carabaos, which were handed over to the Purok Sectorial Working Committee and Brgy Buenavista was handed over a rice thresher machine. Both barangays also received 200 coconut seedlings, 347 packs of rice seedlings, 100 sacks of organic fertilizers, 300 packs of corn seeds and 400 packs of other assorted vegetable seeds.

The program showcased the “Bayanihan” spirit and the convergence of efforts of the AFP and various stakeholders in bringing peace and development to the people of Bohol.