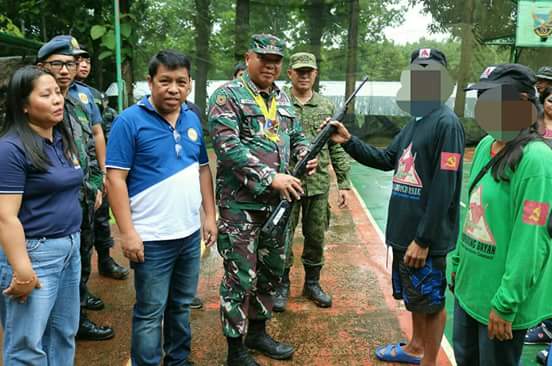 Among these reasons are:
• No support given to their family
• Constant physical, mental, and emotional weariness as well as hunger due to endless day and night movement that they have to endure to evade the military.
• Disillusionment on the cause of the armed struggles. There is no ideology to speak of; they are just being used for a senseless cause that targets to benefit just a few NPA leaders
• Scandal, sexual harassments, and abuses between and among members and leaders
• Unfulfilled promises by the NPA leadership
.They want to go back to their normal and peaceful lives together with their families.
• They want to give their children a brighter future.
• Some of them heard from the radio about 53IB’s Peace Fellowship last June 29 – July 1 with former rebels and their families; and government’s Enhanced Comprehensive Local Integration Program (ECLIP).

“The surrender of these thirteen rebels is proof that the collective efforts exerted by 53IB and other military units in the peninsula together with the different partner-stakeholders, especially the media, were all significant in influencing them to abandon their armed struggles and return to the folds of the law,” Col Bagnus P Gaerlan, the newly installed Commander of 102nd Bde, 1ID, PA, said.

The 53IB assured that they will assist in facilitating their enrollment to the E-CLIP Program of the government to help them reintegrate faster to mainstream society.

These rebels will receive P50,000 for Livelihood Assistance and P15,000 Immediate Cash Assistance under the program.

They will also receive firearms remuneration. With the Garand, an additional P30,000 will be given while for the Carbine, P25,000 will be handed out. For the smaller caliber .45, the rebels will receive P16,000.
Psycho-social debriefing, skills training by TESDA, employment, and capacity-building from the different agencies of the government and security as guaranteed by AFP and PNP will also be given to the former rebels.

“Our units on the ground will relentlessly pursue localized negotiation for those Communist NPA Terrorist (CNT) willing to go back to the folds of the law and live normal lives with their families. We will, however, remain steadfast in neutralizing those who remain with their useless cause with the NPA organization,” MGen Roseller G Murillo AFP, the Commander of JTF ZAMPELAN and 1st Infantry (Tabak) Division, PA, said.